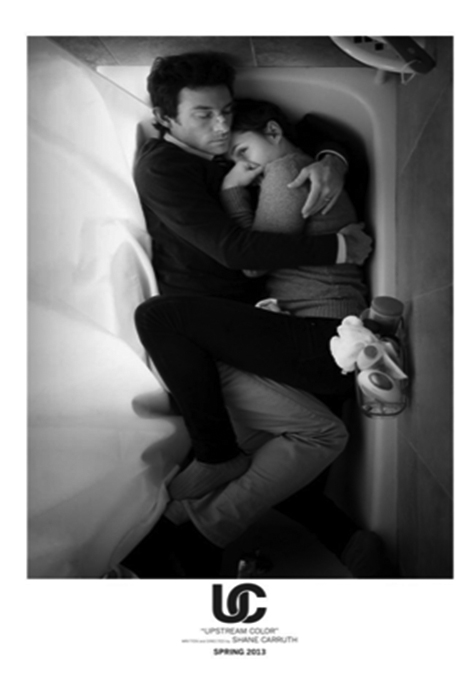 ‘The most visually imaginative American film since David Lynch's Eraserhead’ (Time  Out), ‘Upstream Color’ might be described as an oblique romantic science-fiction mystery thriller.  A woman, Kris, is kidnapped by a drug manufacturer (Thief) and contaminated with a worm that keeps her in a trance-like state during which the Thief strips her of all her savings. Kris is subsequently dewormed by a character known as the Sampler, who transfers the parasite into a  pig that maintains a physical and/or metaphorical connection to Kris. Kris later meets and falls in love with Jeff who, we eventually discover, has been a victim of the same ordeal.

The rest of story resists synopsis, and even the bits that can be summarized probably shouldn't be, because "Upstream Color" can't be reduced to a linear narrative. It's not about what does or  does not happen to whom and when. It is what it is, as it is, in any given moment.
Anyway, critics consensus is: As technically brilliant as it is narratively abstract, Upstream Color represents experimental American cinema at its finest - and reaffirms Shane Carruth as a talent to watch.

“Should you see Upstream Color? A better question may be: How many times should you see it?” - Washington Post  “No amount of concentrated analysis can really explain the level of deep emotion that  Upstream Color effortlessly evokes.” - Movie Mezzanine  “It’s all a neat trick. Or exercise. Or brain-teaser. Whatever you want to call it, Upstream Color is like nothing you’ve ever seen before. “But once you have seen it, once isn’t going to be enough.” – Arizona Republic